The Victrola Navigator 8-in1 Record Player in review – loaded with goodies, is it everything it’s cracked up to be? Find out in our awesome expert review! 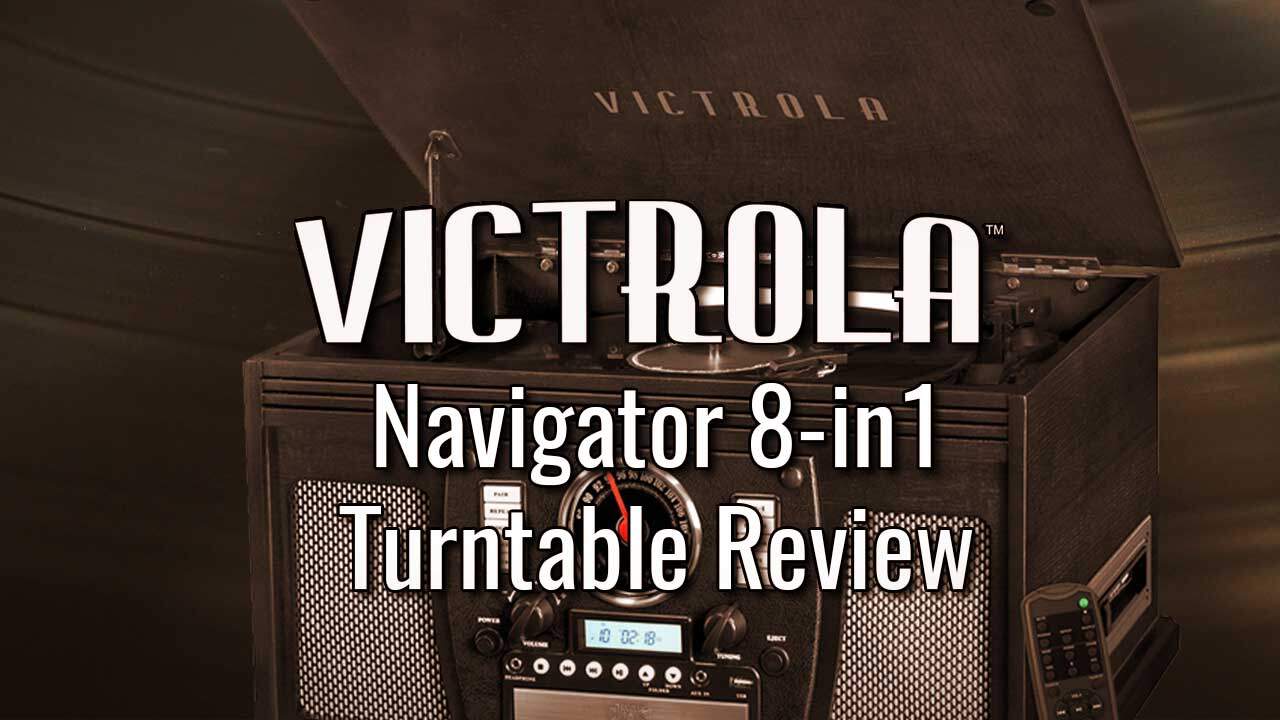 Victrola Navigator Ratings At A Glance:

Victrola’s Navigator Combines Vintage and Modern Technology In One Package

When it comes to record players, one of the newest trends is mixing vintage and modern features together. Even better,  you can get all these useful features at a super affordable price.

Victrola’s Navigator 8-in-1 Bluetooth record player is just what it sounds like, 8 listening options in one package. As one of the better multifunctional entertainment centers, it even features a CD and cassette player for those who think just records aren’t hipster enough.

Highlights include built in speakers, meaning no external audio system is needed. A wide variety of controls and buttons greet you on the front panel, but don’t be intimidated. At its core, the Victrola Navigator record player is pretty user friendly.

What Is The Victrola Navigator Multimedia Center Meant To Do?

Victrola’s Navigator is really a one stop shop for audio junkies. Packing 8 sound options into 1 compact record player, it is the all in one solution for audiophiles.

Instead of filling a whole room with stereo systems, record players, and modern bluetooth speakers, the Navigator can do it all.

Who Is The Victrola Navigator Record Player Made For?

Thanks to its all-in-one construction and purpose, the Navigator is incredibly versatile. It is built for anyone who wants or requires a wide variety of listening options.

If you want to grow and listen to your CD or record collection, but still have a party-ready speaker with Aux cord, this is the record player for you.

Perfect for bed rooms, dorm rooms, or even large living room setups, the Navigator is great for the do-it-all listener.

Because the Victrola Navigator 8-in-1 multimedia center is a one stop solution, it doesn’t need many accessories. Likewise, it doesn’t come with much besides a handy remote, USB connection cable, and computer software.

Aside from these features, there’s no need for much else. Because it doesn’t have an auxiliary out port, it can’t be connected to external speakers.

This may limit just how loud it gets, but it also means the Navigator 8-in-1 doesn’t require additional purchases or accessories.

As the name implies, this is a feature packed record player. This Navigator Record player from the Victrola company has the ability to play records, CDs, cassette tapes, AM/FM radio, and has bluetooth and aux connections for modern computers and cell phones.

Furthermore, you can even record vinyl records to MP3 when you connect the included USB cable. Simply use the software that comes included, and you can make sure your record collection has a digital backup for mobile listening.

For those who don’t have a streaming subscription, this is a great way to expand your digital music archive without online purchases.

How To Get The Most Out Of Your Victrola Navigator

As we’ve said before, you can get the most out of the Navigator if you use it as your all-in-one entertainment system. You can get all your favorite music from almost every recorded music medium possible.

If you don’t have much in the way of a stereo system, this is an excellent place to start. Furthermore, if you’re looking to simplify your setup, this is a great way to clear space without giving up sonic options.

If the 8-in-1 Victrola Navigator is a bit over the top for you, consider a stripped down option. The Victrola Nostalgic Classic Wood is a 6-in-1 record player that packs many of the same features as the Navigator.

If you want a more streamlined user interface without the vinyl to MP3 connection, the Victrola Nostalgic 6-in-1 record player may be a better option for you.

Even more affordable and streamlined, check out Victrola’s 50’s Retro Bluetooth Record Player. It has all the bluetooth and aux capabilities of the Navigator, but it in a sleeker, 50’s inspired package.

It still packs the AM/FM radio and CD player capacity, as well as the 3 speed turntable. You lose out on a few features like the cassette deck and in depth controls, but you do save a few bucks.

Are you shopping for a bare bones sound system? Well you should probably redirect and check out Victrola’s 6-in-1 Bluetooth record player.

If you’re not sure about Victrola, you may be interested in our in-depth article comparing Victrola and Crosley.

Final Thoughts On The Victrola Navigator

It’s hard to find much that the Victrola Navigator 8-in-1 can’t do for you. It is really a one stop shop for audio and listening experiences.

Especially if you have a diverse music collection that isn’t just vinyl and digital. If CDs and cassettes are still your style, this is an excellent way to blend your collections into one ultra usable device that will serve your personal listening needs.

With some issues like poor headphone jack sound quality and no auxiliary out port, it certainly isn’t perfect. But for the money, the Victrola Navigator 8-in-1 bluetooth record player may be one of the most useful options on the market.

Is the Audio-Technica AT-LP120-USB Direct-Drive Turntable as good as it seems? Find out if it’s...

The PS-LX310BT turntable is recognized for its innovations and features – but how does it...

In our expert Pyle Vintage Style Bluetooth Turntable review, we find out if its classic...

The Wockoder Portable Record Player may be easy to carry with a ton of options. But...

The popular Fluance RT85 Reference Turntable may be loaded with great features, but is it...

Does the cost-effective Victrola Modern Turntable System with 50 Watt Speakers live up to the...

In this Orbit Plus Turntable review, find out if it’s sleek, elegant lines and a...

In this 1byone Wireless Turntable HiFi System review, we look at whether it’s a good...