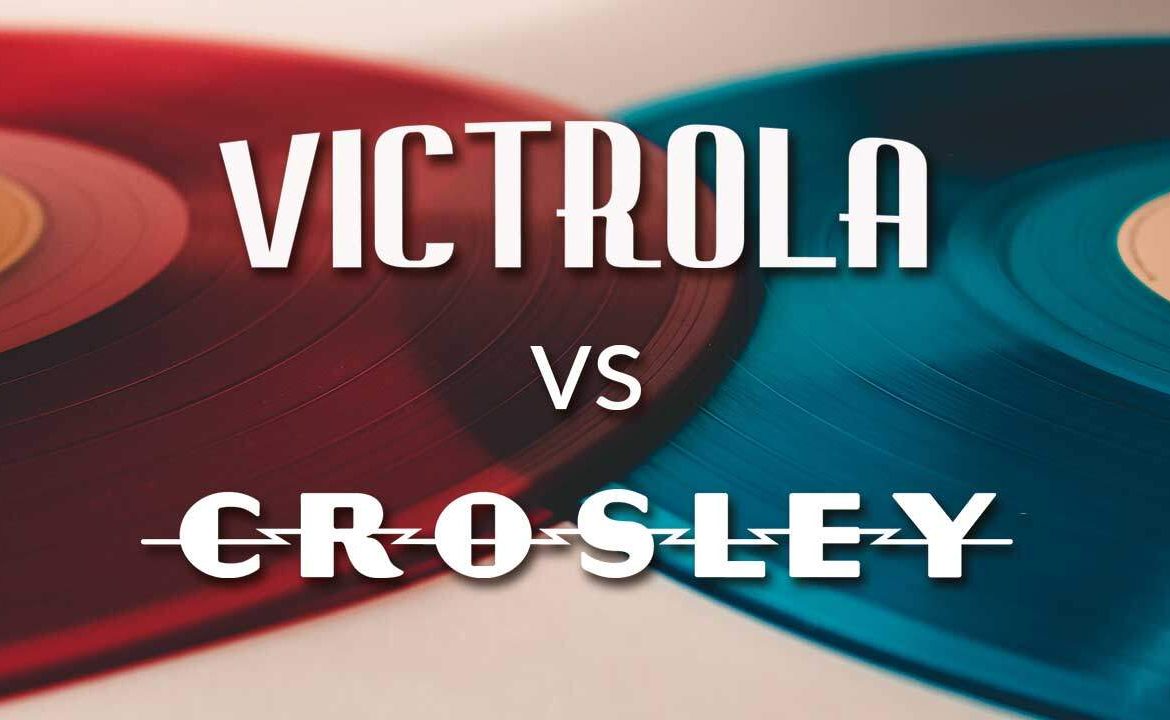 In this Victrola vs Crosley shootout, both are well-known brands in the music industry. But how do they stack up against each other? Which of the two is better?

Should You Choose a Crosley or Victrola Record Player?

Are Victrola and Crosley the Same?

Victrola and Crosley each have their own distinct brand identities even though they produce similar products in the music industry.

They’ve both established themselves as brands that have a reputation for putting out quality record players. But the real questions are: how do they stack up against each other? And which of the two is better?

In this post, we will look at this question in more detail and finish off by going through the highlights of three models from each brand.

In the end, you’ll get an overview of the differences, an idea of what they offer, and an understanding of which brand is better.

Which is Better, Victrola or Crosley?

That depends on what you’re looking for. Our staff at FatCityTurntables.com went through some of the best offerings by each company to give you a better idea.

We have tried to stay with models that represent a reasonable cross section of what each manufacturer is currently offering. Within certain price ranges, the available models are usually higher in portability but lower in speaker quality.

But for our purposes, we’re going to concentrate exclusively on two of the most popular manufacturers of everyday units for new vinyl enthusiasts: Crosley and Victrola.

What are other good brands of record players?

Other than Crosley and Victrola, there are a quite few brands or record players out there such as:

The Victrola brand has been in business for over a century. It has gone through a few incarnations. In its latest form, the Victrola company focuses on home entertainment. It does have a range of products at different price points, so you will find something to match your budget.

Victrola also produces a range of styles, but retro styles seem to be more prevalent. When we say “retro” here, we don’t just mean it looks like something out of the sixties. They also have models that wouldn’t have looked out of place at the turn of the last century.

If retro is your thing, this is a great place to start. They also seem to offer a lot of multi-functional products. You’ll see below that they have an entertainment center that will play via Bluetooth or play a cassette, CD, record, or even the radio.

We have mixed feelings about these all-in-one models. Sure, they save space and give you many different options when it comes to playing music, but we have to wonder whether there are too many components to sync in these models.

In terms of value for money, you’ll do well with Victrola, but their warranty period is not as good as Crosley’s. For the first ninety days, you’re covered for all manufacturer’s defects.

For the remainder of the year after purchase, they only pay to repair or replace damaged parts.

It’s not clear exactly what this means. Does it mean that after 90 days, they will no longer replace the item if something is wrong? Do you have to pay for the labor if you send it in after this period?

Unfortunately, the company has also gotten something of a reputation for poor customer service as regards warranty claims.

Crosley has proven themselves to be a visionary in the market. They don’t have as long a pedigree as Victrola, but they have been around for over thirty years now. Where they proved visionary was back in 1992, when they started releasing vinyl players.

At that stage, it seemed like an insane move. After all, CDs were the rage and offered listeners a whole new experience. As it turns out, it was a longshot that has paid off in the long run. The recent resurgence in popularity of vinyl has proven them right.

The company now manufactures a wide range of home electronics, plus they include helpful videos for their products:

Today, the Crosley company focuses on creating players that work well and also look good. They have several options that look retro, and this can make you feel like the coolest kid at the party.

Unfortunately, sometimes the company has a tendency to sacrifice sound quality to stay with the full retro vibe. While we appreciate that they are trying to maintain an image, this means that not all models perform as well as we would like.

There have been reports of motor noise leaking from the turntable into the stylus. And the smaller speakers on some models lack the bass response more experienced audiophiles would appreciate.

Regardless, you can still enjoy the vinyl experience especially when connecting external speakers that produce a wider range of frequencies.

That said, even on a bad day, a Crosley will outperform most of the cheaper brands out there.

Price-wise, the company strives to keep things affordable, which is a big mark in its favor. It has a range of products to suit every budget. It also scores big points in the customer service arena.

Crosley offers a one-year warranty on all their items that covers manufacturer’s defects.

A Look At The Best Victrola Record Player Models:

These Victrola models offer both quality sound and an aesthetically pleasing design:

This is the least expensive model that we review here, and it is good if you like a plain, unassuming look. It is portable and, when closed, looks like a suitcase.

If you want something that is easy to take with you, this could work out well. We do suggest managing your expectations in terms of sound quality, however.

The portability of the unit means some sacrifice in sound quality and volume. Plugged into a preamp or better speaker system, it will do better.

One of the more expensive models that we are reviewing, this looks ultra-cool if you like a 1940s aesthetic.

Again here, we wonder about the wisdom of incorporating all these different forms of media. We can understand having a CD player as well, but how many people still listen to cassette tapes? The phrase “jack of all trades and master of none” comes to mind.

Read our full review of the Victrola Aviator here.

This stylish retro unit comes in at a reasonable price and is one of the most popular models on this list.

As mentioned, this Victrola Retro Record Player is reminiscent of the 50’s. It sports a stunning diner-style finish and includes a host of extra connectivity features for extra convenience.

A Look At The Best Crosley Turntable Models:

Here are some of Crosley’s offerings when it comes to record players with a vintage appeal.

This model has a pleasing vintage look and is not badly priced.

The sound here is not bad, but it does pay to realize that there is only so much volume that you can achieve from built-in speakers. If you want to rock the whole house, you’re going to have to jack it into speakers with a lot more juice.

This portable player comes in a cool two-tone briefcase design, but it doesn’t put out a lot of sound. It’s better if used in conjunction with powered speakers or earphones.

Again, manage your expectations. This puts out some decent sound, but it’s not going to be the highest volume you’ve ever heard.

This model comes in at the top of our price range, but it has some pretty nice features. Of all the vintage models, this one looks the most authentic.

The reviews for this model are largely good. The sound is not bad, and it works well.

In Conclusion, Which Record Player Is Better Crosley Or Victrola?

In the battle royale of Victrola vs. Crosley, another way to ask that question is: are Victrola record players better than Crosley?

It’s a tough call – both brands seem to match one another well. Victrola is a long established company and their record players sell very well. Crosley on the other hand, may not have as long a history, but offers an amazing array of record player options, plus a host of related electronics products.

Finally, though, we have to look at it from the point of view of the warranty. We don’t like the wording of Victrola’s warranty.

Victrola’s warranty states: “90 Days Labor, One Year Parts” whereas Crosley’s states: “~ covers defects in materials and workmanship for a period of ONE YEAR”.

With our concern about the longevity of multi-functional devices, this works against the company. In the end, we think that Crosley wins by a hair thanks to this point.

All things considered, our favorte would have to be the Crosley Musician Turntable, it simply offers the best balance of all features offered by both companies.

Which portable record player is the best for you? With so many players available to...

What’s the the best all-in-one turntable for your given budget? With so many to choose...

What would be the best turntable under $500? With such a budget in mind, can...

Are record cleaning kits all the same? And which one does the best job of...

Which is the best turntable preamplifier that fits you and your budget? Find out with...

With the turntable industry being highly competitive, what are the best portable turntables? And can...