With sleek vintage style and a host of modern features, is this turntable as good a value as people think? Find out in our expert Victrola 50’s Retro Bluetooth Turntable Review! 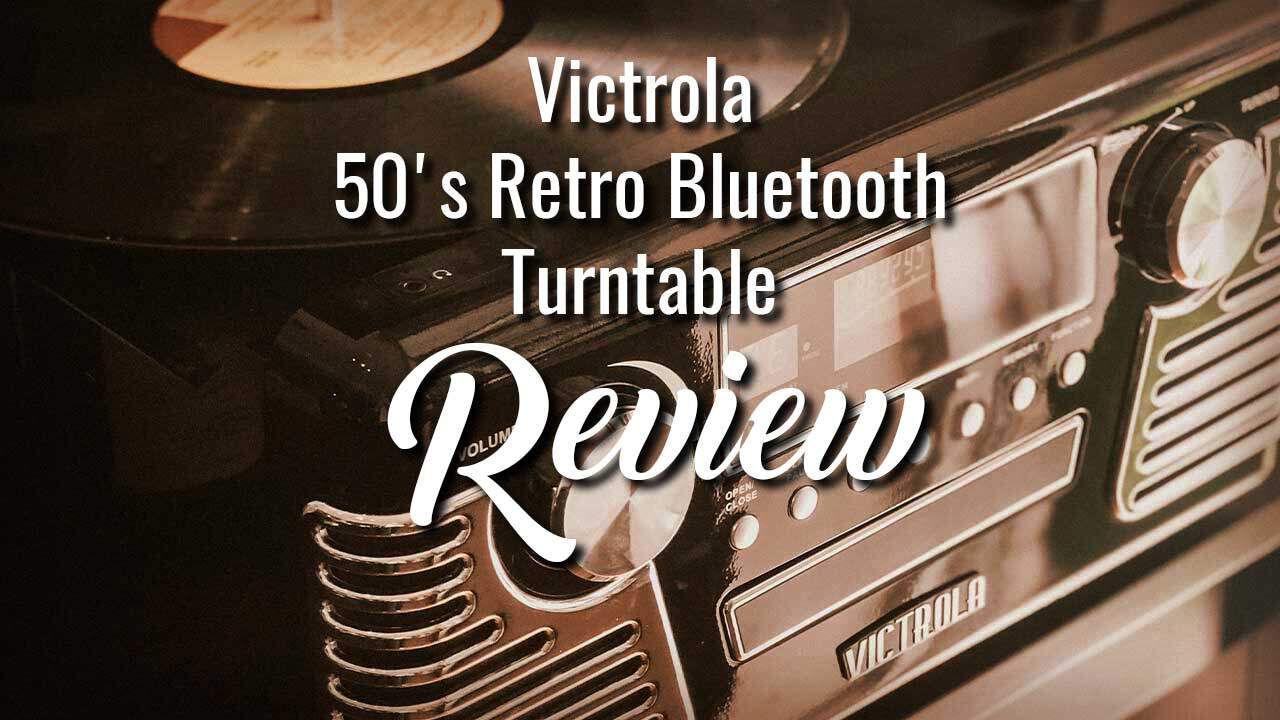 Reviewing the Sound, and Look, of Fifties Retro with Victrola

The Victrola Retro 50’s Turntable at a glance:

Victrola has been creating audio appliances since 1906 and they never stopped since then. Their expertise and craftsmanship are incomparable to other newer brands.

When the nineties came, almost everyone thought that the era of vinyl records have drawn to a close, but Victrola proved that it’s just dawn of a new era, just like all the other decades they’ve lived through.

Today, we are going to talk about one of their units, the 50’s Retro 3-Speed Bluetooth Turntable. What makes this unit so unique is its retro design. That and being one of the better multiple featured record players found a very affordable prices. Let’s go ahead and learn more about this product.

This brand has a collection of affordable three-speed turntables of various designs. There’s one that sports a mid-century vintage vibe, there’s a portable one with a suitcase casing complete with a carrying handle, and of course, there’s a simple, more minimalistic piece with wooden accents.

Of all their versions though, the unit we’re featuring here has a retro feel to it, conjuring up what you would expect from a fifties diner playing your favorite tracks as you’re sipping a spiked milkshake.

Who Is This Retro Turntable For?

This unit is for music lovers looking for a stylish, fun-looking turntable that’s made by a brand renowned for high music quality but who are not willing to shell out a lot of money.

This is also great for beginners looking for a nice entry-level turntable to start playing their favorite tracks all in one place, including CDs, radio, and streaming from portable digital devices.

What’s Included and How Does It Work?

If you have decided that this product is for you, you can expect to receive the turntable equipped with a stock stylus that can easily be replaced later on. For more information, here’s a quick unboxing video:

Let’s now talk about its impressive features since there are quite a few. Here they are:

The only thing missing from this device is the ability to play cassettes; otherwise, it would be complete.

How to Get the Best Sound from Your Victrola Retro Turntable

The Victrola 50’s Retro 3-Speed Bluetooth Turntable is already affordable on its own, but to make it even worth your money, here are some tips to get the most out of it:

Putting the tips we have shared with you into action will significantly increase the quality of your listening experience.

This unit is indeed impressive with its numerous features, but are there other record players out there that can match it? Let’s find out.

For our first find, it’s the Wockoder’s 3-Speed Record Player. It’s around the same price as our featured item by Victrola’s, but if you’re looking for a more toned-down minimalist look or a unit that exclusively plays vinyl records, then this piece is for you.

The second item we’ve found that also offers three-speed settings is the 1byone’s Nostalgic Wooden Turntable. As the name suggests, it has a mid-century design. It’s a bit more expensive than the Victrola 50’s Retro 3-Speed Bluetooth Turntable because it has a cassette player as well.

Finally, if you’re wondering whether Victrola has another model that also has a mid-century design that plays cassettes, then you might want to look at their Navigator 8-in-1 Classic Bluetooth Record Player. In fact, to take it to another level, this unit comes with a remote control too. However, expect that it’s more expensive than the unit we’ve featured here.

Final Thoughts: Is The Victrola 50’s Retro Turntable Right For You?

In the end, it will all depend on your audio needs. Do you really need a cassette player, or can you settle for a unit that lacks one? Or probably the unit that you need is one that only focuses on playing vinyl records?

Take your budget into consideration as well. We believe that the Victrola 50’s Retro 3-Speed Bluetooth Turntable already gives you the best of your money’s worth, but if you have the extra budget, then why not invest it on the Navigator 8-in-1?

“What does your passion sound like? Fluance knows the answer.“ A nice catch phrase. And...

In this Victrola Aviator 8-in-1 Record Player review, we find out if it delivers what...

In this Orbit Plus Turntable review, find out if it’s sleek, elegant lines and a...

In our expert 1byone Belt-Drive 3-Speed Stereo Turntable review, we ask: does it deliver value?...

Does the Victrola Nostalgic Classic Wood 6-in-1 Bluetooth Turntable provide everything to allow you to...

In this Audio-Technica AT-LP60XBT review, we look at the quality of what this unit offers...

The Jensen JTA-230 Turntable is certainly not going to break the bank, but does it...

Is the Audio-Technica AT-LP60 with Harman Soundsticks package as good a deal as it seems?...