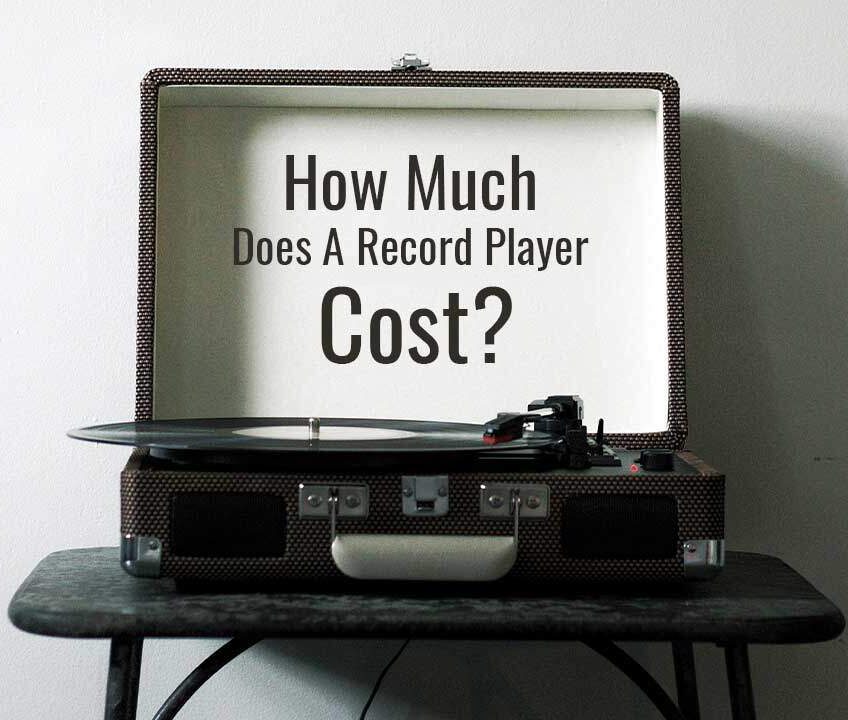 Looking to start enjoying vinyl records and need an answer to the question “How much does a record player cost?” The short answer is be prepared to spend between $80 and $300 for a reasonable starter outfit. But keep in mind there are other considerations…

What’s the Cost of a Good Record Player?

Let’s get down to brass tacks by changing the question a little. Let’s figure out how much a decent turntable would cost instead.

Obviously, you’re best off if you set some money aside for this purchase. The better the quality of the equipment you purchase, the better the results are likely to be. It doesn’t pay to cheap out here because cheap players may not play the records at the right speed, are more likely to skip or slid, and could end up damaging the vinyl.

That said, you don’t have to mortgage your house to get a decent system. You might consider spending around $200 – $400 to get yourself something that will produce great sound and last for a good many years if you listen to a lot of music.

If you’re not going to listen to it all the time, you can easily make do with one of these record players under $200. Do your research upfront. We publish reviews of most of the models to hit the market, so our site is a good place to start.

Why Should You Buy Vinyl Records?

Audiophiles can be tough to please, which is one of the reasons that vinyl has made such a comeback. Vinyl sounds a lot better than your standard CD because of the difference in recording.

CDs are digital recordings, which means that not all the sound information is recorded when it is being played. If there are gaps in specific sounds, it doesn’t matter because the computer can fill them in.

Vinyl, on the other hand, records every little nuance. How Stuff Works has a very nice explanation of the process, so check that out if you want to know more. For most of us, though, it’s enough to know simply that a vinyl recording has more depth.

For this reason, you should consider buying a record player. The next question, no doubt, will be “How much does a record player cost?” The answer, maddeningly enough, is “It varies.” Like everything in life, you can get turntables at a range of different prices.

What’s the difference between a record player and a turntable?

These terms tend to be used interchangeably, but there is a difference. The turntable, technically speaking, is just the disc that actually spins the records, and the phrase “record player” refers to the entire device.  Every record player has a turntable.

Like a CD player, a record player sends out a signal; to be able to hear this signal, you’ll need speakers of some kind. These can be in the form of added or built-in speakers, but some record players also give you the option of plugging in earphones.

That’s a loaded question and one that will depend on the budget that you can set aside. Which option you get depends on what kind of performance you want. It’s advisable to get the best quality that you can afford, preferably in a model that you can upgrade later.

If you’re not sure about whether or not this is the way forward for you, stick to a minimum $80 – $100 price range. Make sure that it has an integrated preamp so that you can pipe the sound to your speakers without issues.

For more information on great record players to start with, check out our complete comparison guide on two of the biggest brand names: Victrola and Crosley.

Also look for a model that allows you to switch out cartridges. This allows you to upgrade the sound quality later at a much lower cost. Look at the way the turntable is driven, too. A belt-driven model will reward you with fewer vibrations, but the belt may need to be repositioned if you are changing speeds.

Stick with a reputable manufacturer and don’t get sidetracked by features that you will seldom, if ever, use. At a later stage, you might want something that gives you a few more options, but to start off with, simpler is better.

The Final Answer To “How Much Does A Record Player Cost?”

Be prepared to pay at least $100 for a somewhat decent stater record player. If you are a music lover and plan to amass an extensive collection of vinyl, save up a bit and get a better model. At the very least, look for options that are upgradable at a later stage.

It’s worth spending a couple hundred dollars on one piece of music equipment that only plays vinyl if you enjoy music that is as close to what the artist recorded as possible. Choose a decent quality option, and you’ll be hooked for life.