What’s the difference between a turntable and a record player? Is there one? Let’s find out by taking a closer look. 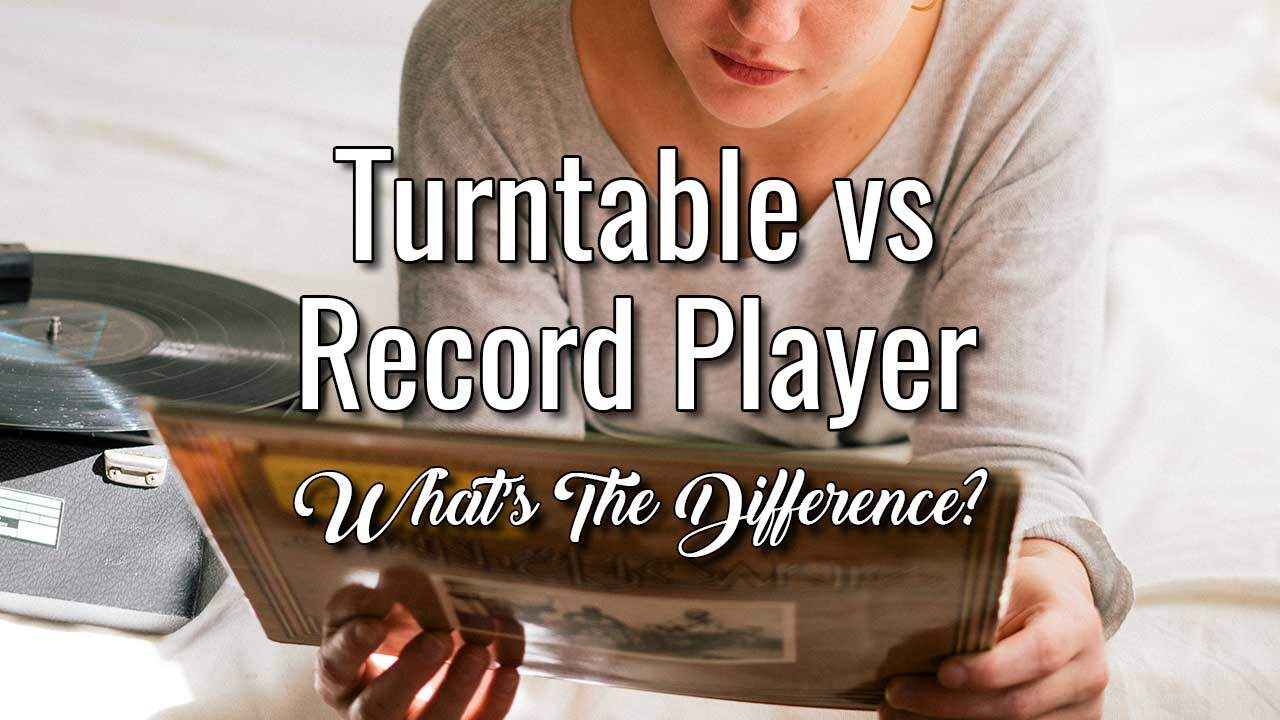 Turntable Or Record Player: Which One Is Best?

While these two names are commonly used interchangeably, they are actually two different products that can be used similarly.

With the vinyl revival in full swing, more people than ever are shopping for their record player or turntable. Before we dig too far into the differences, let’s clearly define both products.

Is a record player and turntable the same thing?

Key Differences at a Glance:

A turntable is simply defined as a platter with a pickup device of some kind. The platter holds a record while it spins and the pickup, usually a cartridge with a built-in stylus that will follow the groove patterns in the record.

This cartridge takes a small electrical signal, much like how an electric guitar pickup works, that can then be sent to an external amplifier.

A record player functions very similarly to a turntable, with a platter and cartridge to create an electrical signal from a vinyl record.

However, record players have built-in speakers and a preamp, which takes that electrical signal and turns it into the audible music we all know and love.

Breaking Down The Differences Between Record Players and Turntables In Depth

A turntable can be as simple as a platter and a stylus for reading the record. They will, at the minimum, have connections to add external speakers, but can be incredibly small, lightweight, and sleek.

Contrary to a record player, a turntable with small external speakers may be a better option for smaller rooms where space is limited.

Furthermore, turntables are much easier to take on the go giving them a reputation as a more portable option for vinyl listening.

On the other hand, a record player is more likely to be heavier and or bulkier than a turntable. This is due to the built-in features that allow you to actually listen to your record.

Speakers tend to be built into the chassis or frame of the record player, alongside other extras that take up space and add weight. Many record players have built-in CD drives, cassette players, or AM/FM radio.

These are typically viewed as a one-stop-shop type solution for all your audio entertainment needs. Likewise, the large size, weight, and versatile options can make them excellent centerpieces for entertainment centers.

Turntables on the other hand typically have few to no extra features or functionalities. Some modern features that have been added include bluetooth capability to wireless play music from an external device.

Likewise, there are many turntables available that come with software and USB included to let you convert your vinyl music to digital mp3 files. But typically, you can expect little to no extras aside from external speakers.

This is one of the major reasons turntables are smaller, lighter, and more affordable than record players.

As stated above, record players tend to be a larger size and weight thanks to the built-in speakers and included features. A record player is often marketed to fill several needs for the consumer aside from just playing vinyl records.

Many record players also feature a mix of vintage and modern audio capabilities, making them incredibly versatile. Oftentimes, the ability to play CDs or cassette tapes is included in record players.

Bluetooth connectivity, for playing music wirelessly from a smartphone or mp3, as well as auxiliary ports for a wired connection if preferred. On top of that, many even feature AM/FM radio capabilities, creating the ability to have an 8 in 1 audio listening product.

So why are turntables lighter and smaller anyway? That’s because their main difference lies in the number of components that each one has.

To be honest, a turntable is simply a component of a record player. It is the main part of the record player in charge of holding the vinyl record and spinning it; hence, the name.

This doesn’t mean, though, that you can’t purchase a standalone turntable because you can, but don’t expect it to come with a pair of speakers or an amplifier.

There are many variations, but a typical turntable signal chain will look like: Turntable –> Preamp –> Power Amp –> Speakers:

This unit typically has built-in speakers and other additional features such as a radio, a CD player, a cassette player.

Some even have an audio converter and recorder to transfer your audio files from your favorite vinyl tracks to your computer or digital devices. These components are the reason turntables and record players differ in weight and size.

You might be thinking: if record players are complete, then why would people even bother getting a turntable. There are two main reasons, and the first one is the customization.

Since turntables are lacking some components, it can be up to you to build your audio system from the ground up as long as your turntable has the appropriate jacks to accommodate them.

This provides music lovers more liberty in choosing the quality, brand, and look of each of the components in their audio set-up.

This effort and the result of it are greatly satisfying, and nothing beats the experience of finally listening to what you have achieved.

A record player, on the other hand, leaves little room for the imagination, nor does it require to be customized.

How much should I spend on a turntable?

The larger size and spec sheet makes it a no brainer that record players are generally more expensive. While you’re paying more, you do genuinely get more for the price.

That’s what makes record players such a great option to be the centerpiece of your audio entertainment center or living space.

You are paying more compared to a turntable for built-in speakers, built-in preamp, and built-in controls. If you’re an avid music collector with more than just vinyl, the price may really be worth it. 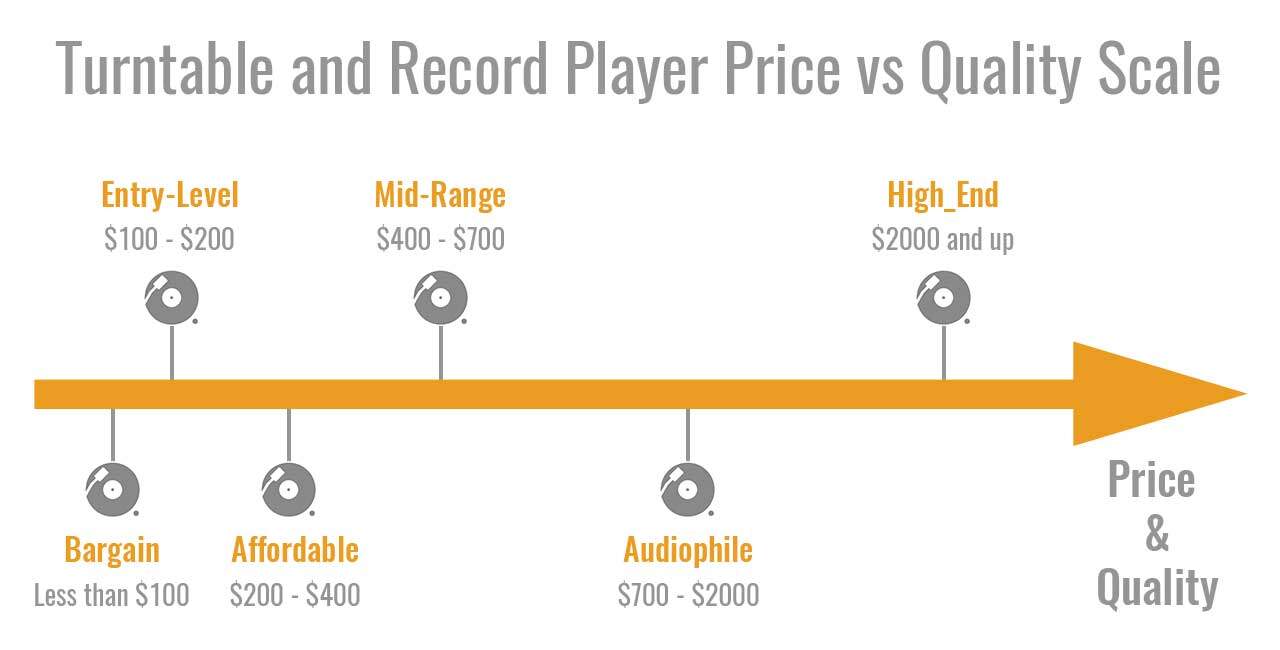 Turntables not only tend to be more affordable, but could better fit the living space of budget buyers who may reside in a small apartment or dorm room.

With less features and functions, turntables are priced and designed to play vinyl records through externally connected speakers.

The smaller size and weight also leaves less room for aesthetic designs that may appeal to a certain customer to fit into a living space.

With the right pair of external speakers, you can get some great bang for your book with a turntable compared to a luxe record playing system.

6. Pros and Cons of Each

Which Option Is Right For You – A Turntable Or Record Player?

When it comes to buying your first record player or turntable, there are many things to consider. Do you want a product that can play more than just your vinyl record collection?

Do you have a strict budget to adhere to. Are you an audiophile with your own high quality speakers already in place?

Generally, if you’re just looking for a sleek, simple vinyl listening option, the turntable may be your best bet and cheapest option.

If you want an all-in-one solution and centerpiece, a larger, more expensive record player should be strongly considered. Either way, your purchase will have you enjoying vinyl records in no time.

Looking to start enjoying vinyl records and need an answer to the question “How much...