Does the cost-effective Victrola Modern Turntable System with 50 Watt Speakers live up to the family name? Find out in this in-depth review! 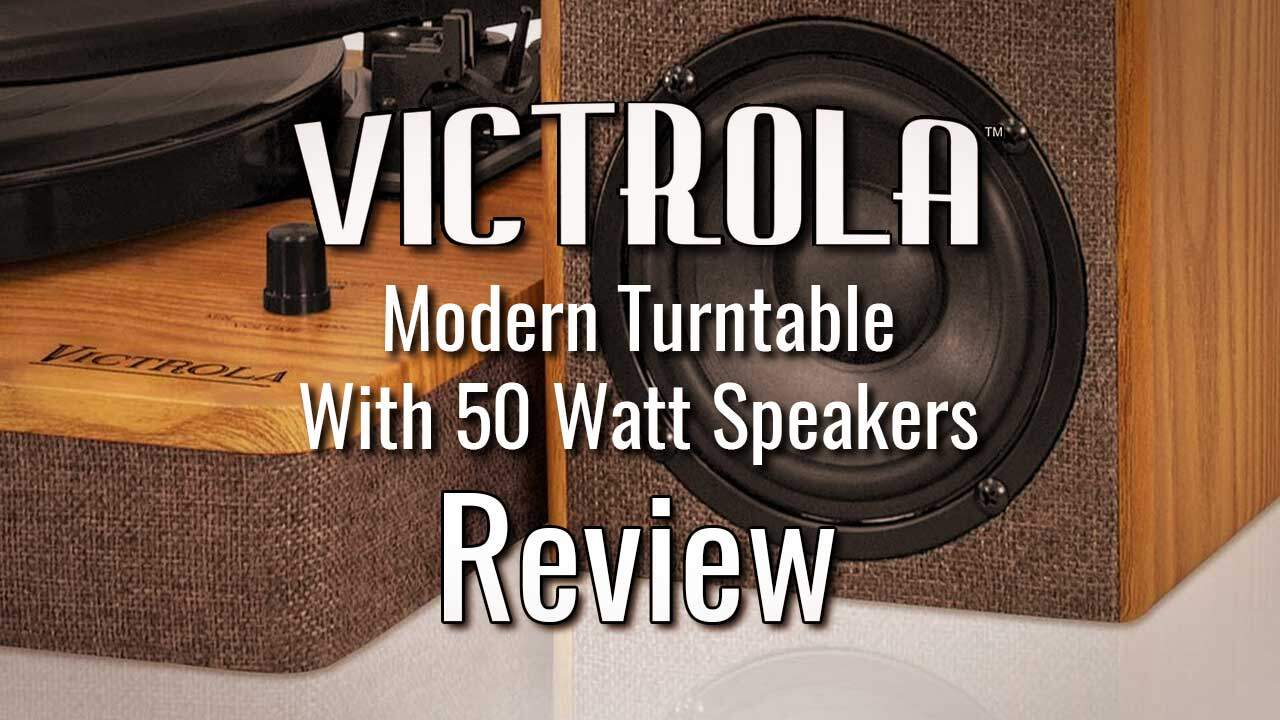 The Victrola Modern Turntable With Speakers: Searching For Vintage Looks And High Output?

With any good sound system, looks are often an inspiring part of each purchase. After all, the sound system is the center of some rooms!

Victrola’s Modern Turntable System is a take on a modern, bluetooth enabled turntable provides those elegant looks with simple construction and usability.

Of course, those missing features may be made up for the inclusion of two external speakers. 50 watts of bluetooth or vinyl sound is plenty to fully enjoy your music to the full extent.

Furthermore, it surely won’t take long to understand how to work your new Modern 3-Speed Turntable thanks to stripped down controls.

At a time when some companies focus on jamming as many tools and functions into products, Victrola returns to a simpler time. While the addition of bluetooth capability adds some modern flair, this is meant to be a classic record player.

Designed with the wood and fabric look of an old turntable, meet the 3-Speed Bluetooth Turntable with 50 Watt Speakers. The mission is simple: deliver an elegant record player with few extras that will fit your budget.

Who Is This Victrola Modern Turntable Intended For?

On the other hand, someone with an impressive stereo system already should look to this as an easy solution to add vinyl records to their options.

Without the CD, cassette, or radio capabilities of competitors, this Victrola should fill your need for a record player, but not much else.

The 50-watts of sound, courtesy of the two external speakers, also makes it a good fit for larger rooms, like a living room or family room entertainment center.

What’s Inside The Victrola Delivery Box?

The theme is simplicity rings true here as well. You won’t find any fancy extras or accessories within your new Victrola 3-Speed Turntable.

The included external speakers are quite a nice touch, as not all record players are even capable of pairing externally.

Otherwise, what you see is what you get! In fact, you may want to invest in a 3rd party cover for protection of your turntable and its needle against dust.

Arguably the best features of this Victrola product have to be the classic looks. Oakwood construction features Burlap fabric wrapped around most of the turntable and speakers.

The old time fabric nicely contrasts the modern feel and look of the wood. A cover for the turntable and needle would have been ideal to protect from dust, but the included speakers is a plus.

With 50 watts of output power, you can get plenty of volume from your vinyl collection or bluetooth devices.

Getting the Most Out of Your Victrola Modern Turntable with Speakers

The stripped down looks and construction make it incredibly easy for anyone to use the Victrola Modern Turntable. Without some of the extra functions, you get an ultra straightforward control panel.

Choose between the 3-speeds of the turntable or bluetooth sources and that’s basically it! This is an ideal solution for music lovers looking for a record player, not a one stop shop solution to use as their home stereo system.

Not your average review video!

Lines for DC power, USB wires, and RCA in/out give you a plethora of options to mess around with at a bit of a higher price.

Looking for something more compact? Check out the Wockoder Portable LP Phonograph, an affordable and convenient alternative to Victrola’s larger set up. A dust cover helps protect your turntable and needle all while retaining wireless capabilities.

This product is even meant to be easily transported, with built in shock absorption for when you take the party on the road.

Looking for a little less volume alongside the same stripped down look? Check out the Crosley T150 Modern 2-Speed Bluetooth Turntable.

Coming in at a similar price to the Victrola Modern 3-speed, you get the same 2-speaker setup but with only 30 watts of output. Similarly, a dust cover could be useful to protect this uncovered record player.

Overall, it’s hard not to like the simplicity and vintage vibe of Victrola’s Modern 3-Speed Bluetooth Turntable. For music lovers who have everything but a record player, it’s a perfect match.

On the other hand, if you’re looking for a more all-in-one vinyl entertainment center, this is not the product for you and you may want to look at alternative vinyl player reviews. The budget friendly price makes it tough to find too many flaws here.

Perhaps you’ll have to be extra careful to dust and care for it without a cover, but Victrola’s Modern 3-Speed Turntable is worth a long look.

TEAC has a reputation for producing some great products. Find out if this player is...

The 1byone Nostalgic Wooden Turntable packs a ton of features into a vintage style media...

Is the Audio-Technica AT-LP60 with Harman Soundsticks package as good a deal as it seems?...

The Pro-Ject Debut Carbon Turntable definitely catches your eye with its stylish minimalist design, but...

With its direct-drive and bluetooth-enabled speakers, the Crosley K200 Turntable System promises to pack a...

Is the Crosley C200A-BK the right value for what you’re looking for? In our review,...

With it’s moving magnet cartridge and other upgraded components, will this modernized Crosley system satisfy...

The PS-LX310BT turntable is recognized for its innovations and features – but how does it...